Downloadable content started out a lot earlier than you might have though. Starting all the way back with the Atari 2600 and it’s GameLine service that was offered through a telephone line. (Gotta love those dial up sounds!) and a similar service offered by Sega called the Sega Channel on the Sega Genesis. These were the earliest forms of DLC offered to gamers and they were pay to play but extremely limited by the technology they had available at the time. Also, the DLC offered were full game titles and not add-on content that we’ve come to all know and despise. 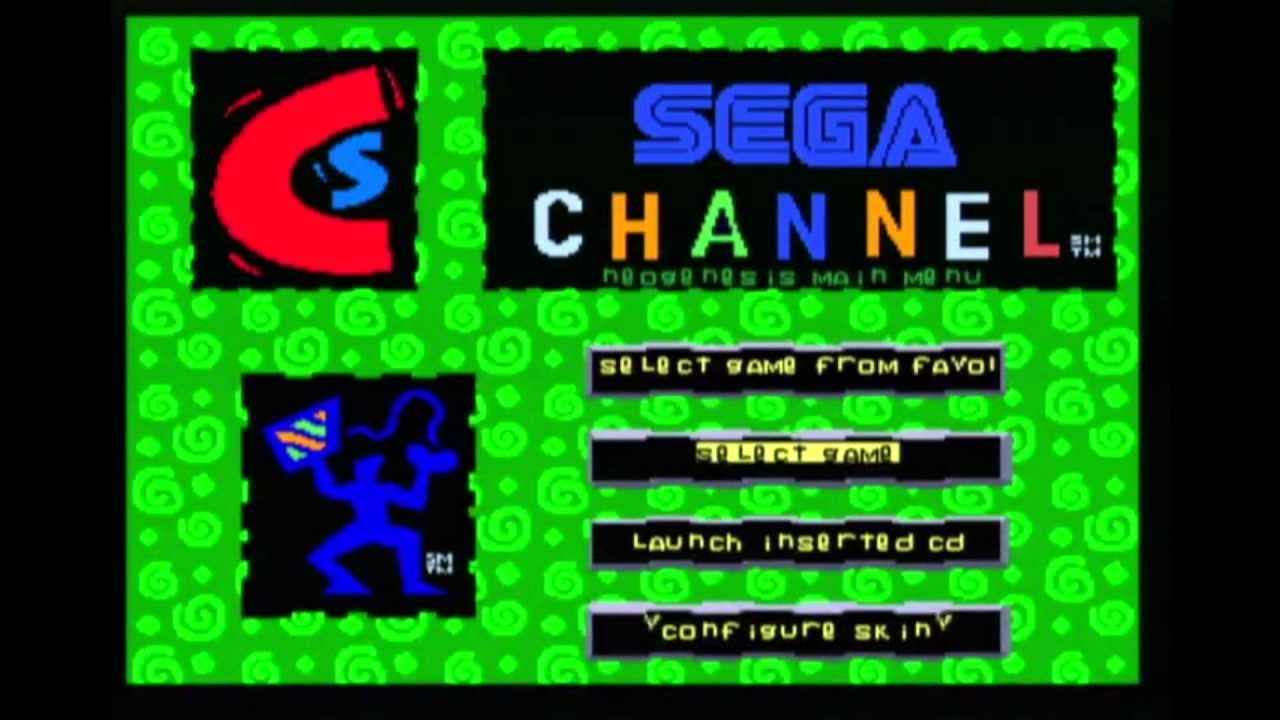 After those initial consoles, the first console with online support was the Sega Dreamcast. With that online support came Downloadable content though it was limited to the size of the memory card in the console, so it wasn’t a lot. It’s a weird sentence to say that SEGA was leading the industry in online gaming. Sony didn’t even ship their console with a built-in network adapter, so Sega was in a league of its own. Then comes Microsoft with built in online support and content for large franchises like Halo 2, Splinter Cell and Ninja Gaiden. Unlike most of the DLC offered to the other consoles at the time Microsoft decided to charge people for them. 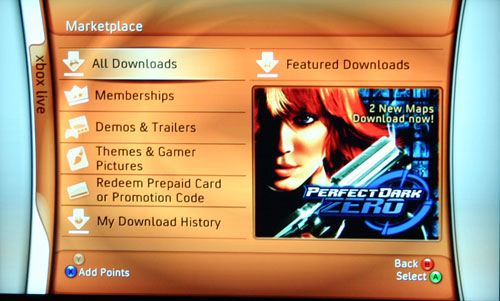 Shortly after the success of the Xbox, Microsoft decided to invest more into the online gaming and thus the Xbox Marketplace was born. The Xbox 360 had DLC fully integrated into the system with an entire section of the console’s interface dedicated to the marketplace. (This is also when Microsoft decided to charge people to play online with Xbox live so thanks for that Microsoft) They decided that it would benefit their publishers if they sold small pieces of content for a fee of around 1-5 dollars. Essentially, they were selling mods that you can find online FOR FREE. Microsoft also was the first company to implement their own currency to avoid banking fees for small purchases which isn’t horrible but at least annoying. One of the small content packs that caused people to get upset was the Horse Armor DLC for the *Big surprise here* Bethesda Softworks game Elder Scrolls IV Oblivion. Many thought it was overpriced and useless as it provided nothing but cosmetics for a single player experience. Think about that. People were mad about at DLC that was purely cosmetic, and it was only 2.50$, oh how far we have fallen. Sony quickly followed Microsoft’s lead, creating the PlayStation Store and from there companies spewed out more shit than people do after taking an entire box of laxatives while eating at a golden corral. There were some good DLCs and a lot that were bad and it would take me a while to go over most of them so I broke the bad ones down into five categories and show you some examples of how some companies are just greedy bastards that use DLC to scam you into paying for content that should be included in the game or free or at least be less expensive . Useless DLC, Pay-to-win DLC, Day one DLC, Over abundant DLC, and Content Lock DLC. 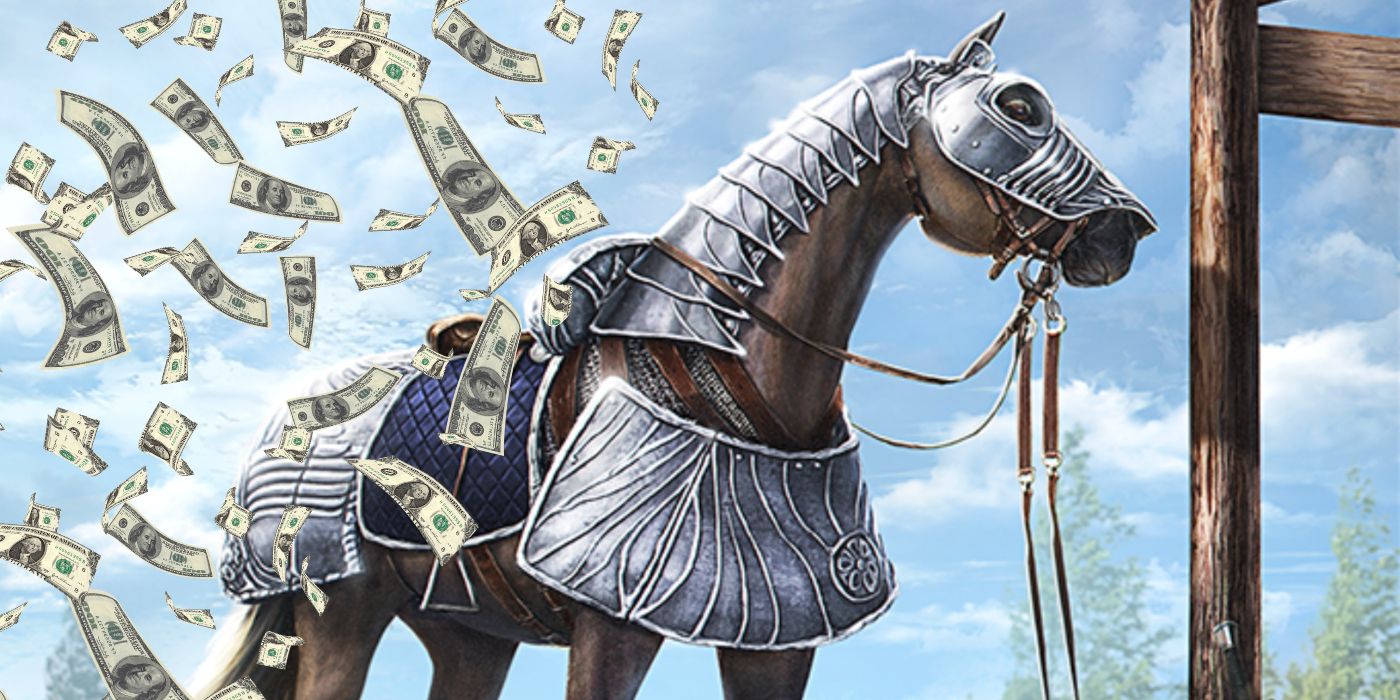 Useless DLCs don’t really add much to the game except for slight cosmetic changes which are normally just cheap mods that could be done rather easily and shouldn’t have a price attached to them like the aforementioned Horse Armor DLC Bethesda put out, which was just stupid to taint the memory of such an awesome game with something so trivial. The Midnight Show DLC for The Saboteur which was literally just a nudity mod for some topless women in brothels and casinos you visit in game and of course the color packs for Street Fighter III: Online Edition, where they just added different color sprites for each character would probably took them a few minutes to create and the worst part is other people couldn’t see these different colors unless the other player also bought this ridiculous DLC. 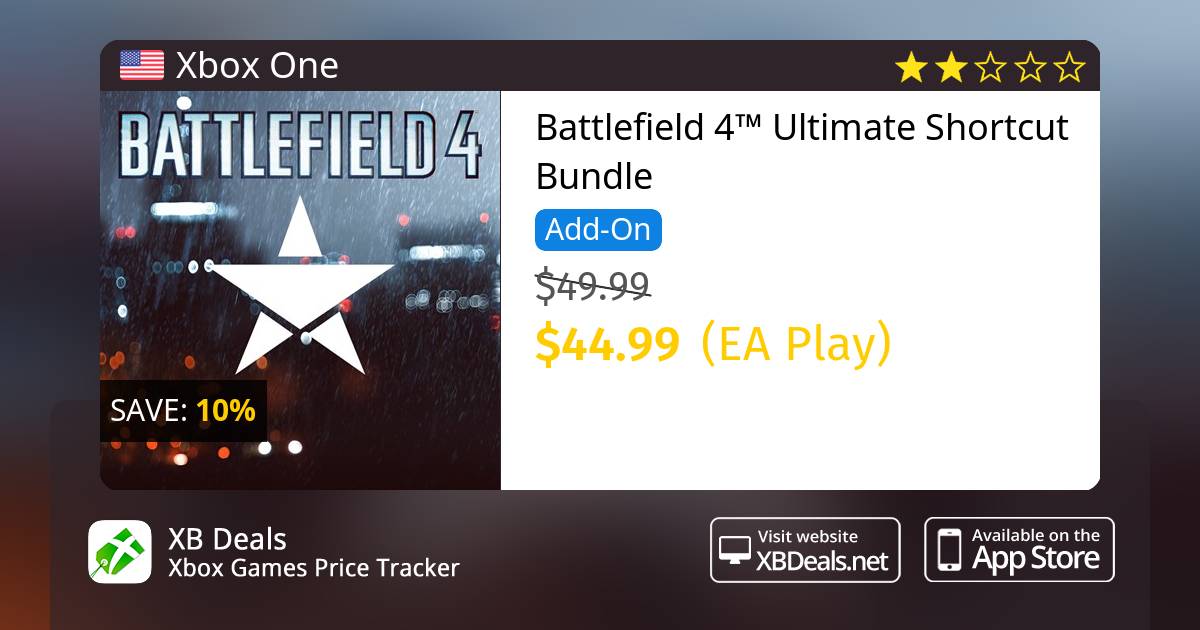 Pay to Win DLC is where instead of having to grind up experience to unlock items you could instead pay for them like the Battlefield 4 short cut bundle, which was literally a short cut to the higher level guns that you normally had to grind through the game to get to. Sonics Lost World’s 25 lives pack just added 25 lives for a preorder bonus and this move received so much backlash that SEGA announced that they weren’t going to make it something you could purchase. Mortal Kombat X was super popular on release but they soured the taste in everyone’s mouth with Easy Fatality DLCs which just allow you to buy fatalities instead of actually learning the moves, and then there’s Star Wars Battlefront 2 not so much DLC but loot box system where you could literally purchase upgrades that made you do more damage in game which received so much backlash and boycotts that they removed it from the game entirely and caused a few national governments to actually start looking in to regulating game companies and their shady practices, and it seems like EA learned their lesson and got the game on the right path and it really started to develop a strong fanbase annnnnnd thennnn they cancelled all the support for it.

Day One DLCs which I think are just never excusable, if you have DLC on day one of the release of your game then just PUT IT WITH THE FUCKING GAME! Deus Ex: Mankind Divided where it was announced that the DLC would only be available if enough people preordered the game, meaning they locked the DLC behind a pay wall, eventually they allowed this content to go to everyone for free only after their game took a huge hit compared the their previous title Human Revolution. Human Revolution sold 1.6 million units to Mankind Divided’s 670,000. Street Fighter X Tekken did horribly after they announced that 12 characters were locked behind a pay wall day one and the worst part is they characters weren’t even downloaded, they were already installed on the disc and just blocked by the money grubbing fucks that are CAPCOM. The From Ashes DLC for Mass Effect 3 which was a pack that added a character and lore that was pretty much essential to get the full story of the game and they made it a preorder bonus or charged people 5$ for it (Mass Effect 3 was also the first console game to really lean into the loot box mechanics and make it successful for the first time so thanks for that EA)   and then one of the worst day one DLCs wasn’t even day one as the game was will in early access was Ark: Survival Evolved where the game came out in early access in 2015 and instead of working on the game to finish it, they started branching out to consoles and adding a free-to-play version before the game was even finished and then announced a paid DLC before the game was fully released. The game finally released in 2017 two years after being in early access and then four months later another paid DLC came out. 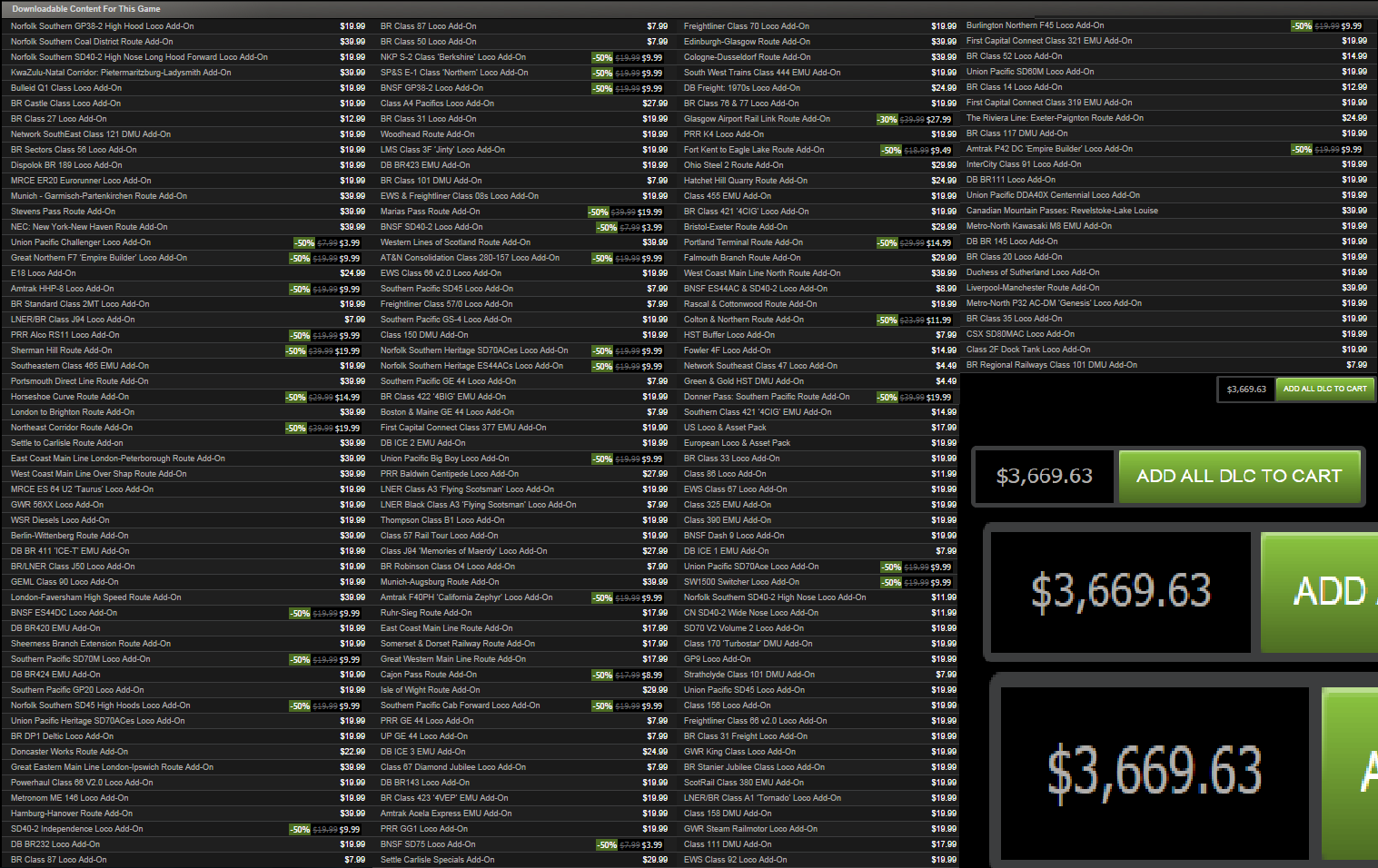 Over abundant DLC means there was just so much DLC that it was absurd, like Train Simulator 2012 and its total of about $3000 of DLC available, the company said that they don’t expect people to buy all of it but that doesn’t make it any less ridiculous. Rock Band being one of the worst ones of these ideas putting out over $9000 of DLC. Now I know that nobody (hopefully) has or will buy all of the DLC songs because that would be bat-shit insane (and also some of those song suck) but that is still an absolutely massive amount of DLC, but the worst of all of these offences is The Sims (oh wow EA again interesting), every time they come out with a new game they release at least 4 or 5 different DLCs or different versions of the same game with minor additions. Shit, in Sims 4 they got in hot water for actually removing content from the previous titles in order to sell them later in DLC packages.

Content Lock DLCs is the worst of all the DLC offences where companies literally lock out parts of the original game with a pay wall. There’s a few games that thought this was an ok business practice like Beautiful Katamari, the fourth game in the series that was revered for its weirdness and odd but catchy soundtrack was marred by the fact that you had to buy the DLC to complete the game. You need the levels included in the DLC in order to create the 1,500,000 km katamari to beat the game which is just appalling and one of the first games to do this kind of shitty business practice in order to get more money out of their loyal fans. Metro Last Light had a similar situation where a difficulty setting that in their own commercials said “it was the way the game is meant to be played” was locked behind a pay wall or if you PREORDERED IT and the worst one that I have seen was the Asura’s Wrath DLC, which was an anime-styled, epic revenge story that ended on a massive cliffhanger only to be revealed that the final fight and actual ending were released as an extra DLC which is absolutely the trashiest thing I’ve seen a company do but I can’t expect much more from the greedy fucks at Capcom.

Now I’m not saying that all DLCs are bad, some are well worth the price and add hours of enjoyable time and more gameplay to some already great games like the Blood and Wine DLC for the Witcher 3 which adds lodes of hours of new content with new missions a whole new area to explore with new upgrades for Geralt and old friends from previous games. The Undead Nightmare DLC for Red Dead Redemption that took the serious tone of Red Dead and turned it upside down with zombies and campy humor to one of my personal favorites was the Citadel DLC for Mass Effect 3 which was just so much of exactly what you wanted as a fan of the series that it was hard to enjoy playing the rest of the game after playing that DLC because it was just such a good ending compared to the ending that actually happened in Mass Effect 3. Some DLCs are great some are awful but before you buy them or pre order a game to receive the extra content for doing so think about how much you think that content is actually worth and how much it adds to the game . Read reviews, do some research, be patient and wait out the initial days of launch. It might end up saving you money so you can spend it on games with companies that actually put out content worth your hard-earned cash. That’s the end of my Blog I hope you enjoyed and maybe you learned something. Please if you enjoyed, take a minute to like and Share the post and maybe leave a comment and have a good day guys! PEACE